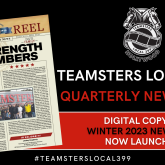 We are excited to share with you our Winter 2023 Quarterly Newsreel that highlights the last quarter, as well as sets the stage for the New Year. Printed copies of … Continued