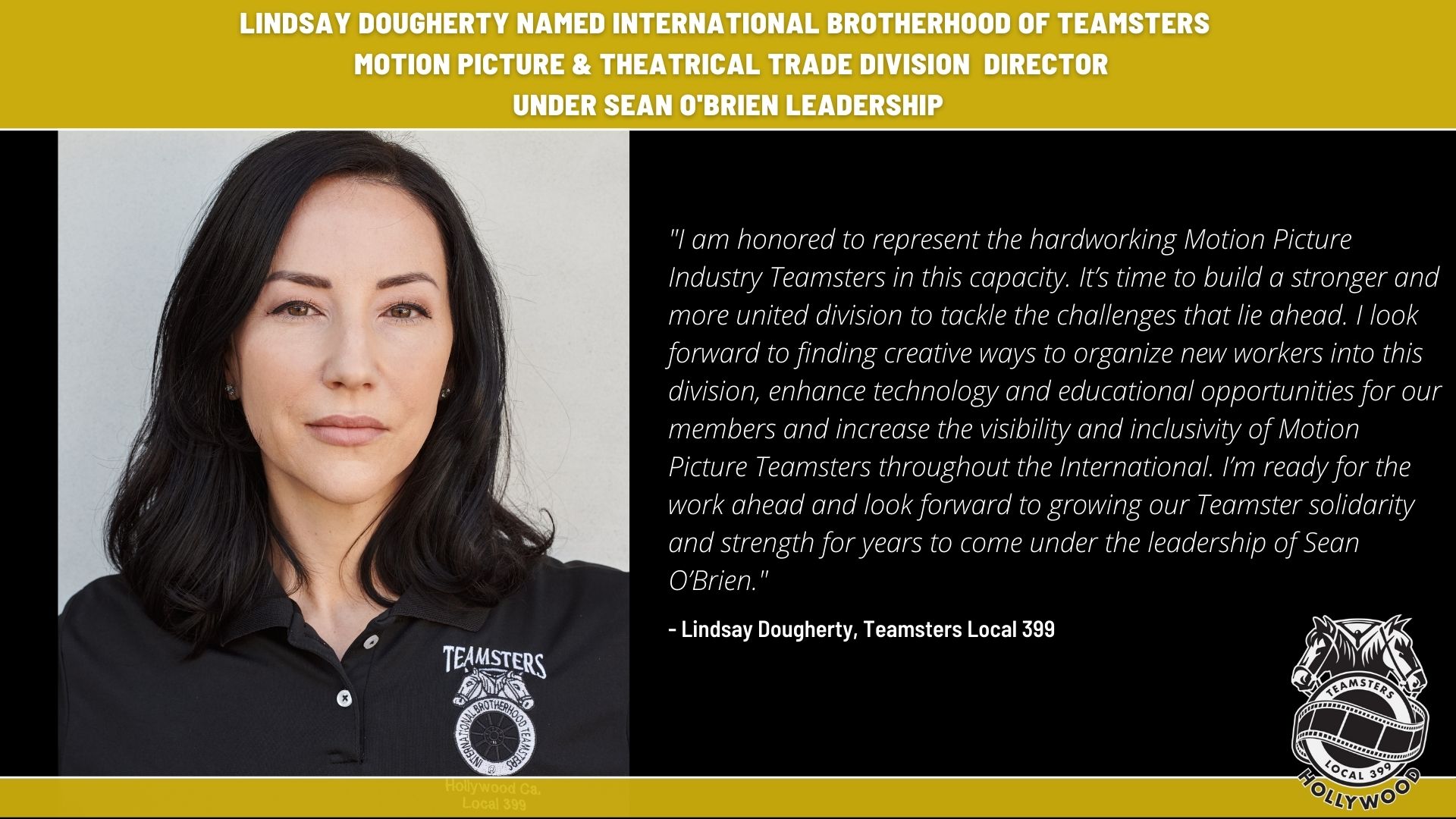 Lindsay Dougherty is the Recording Secretary, Business Agent and Organizer at Teamsters Local 399, which represents over 5,500 Teamsters in Hollywood. She was also recently elected as an International Western Region Vice President on the Teamsters General Executive Board under the leadership of General President-elect Sean O’Brien. She has served as Teamsters Local 399 lead negotiator for the recent Local 399 ‘Black Book’ and Location Manager Agreement with the AMPTP.

Dougherty is a second-generation Teamster whose career in the Motion Picture Industry has spanned almost 20 years. She got her start as a Dispatcher working on major feature films like Transformers and Star Trek. She will be the first woman to serve as the director of this Division.

“I am honored to represent the hardworking Motion Picture Industry Teamsters in this capacity. For far too long we have let some of the largest corporations in the world divide our division and make exorbitant profits off our labor,” said Dougherty. “It’s time to build a stronger and more united division to tackle the challenges that lie ahead. I look forward to finding creative ways to organize new workers into this division, enhance technology and educational opportunities for our members and increase the visibility and inclusivity of Motion Picture Teamsters throughout the International. I’m ready for the work ahead and look forward to growing our Teamster solidarity and strength for years to come under the leadership of Sean O’Brien.”

“I have a lot of respect for those that have led this Division for so many years before me,” said Dougherty. “Each has uniquely impacted our Industry and the lives of Motion Picture Industry Division Teamsters in their role. I especially want to thank Tommy O’Donnell. He has worked in the Motion Picture Industry for decades and his leadership and commitment to this division these last 8 years is invaluable.”

The union, founded in 1903, represents 1.3M workers throughout North America and Puerto Rico — of that number, over 12,000 work in the motion picture/theatrical trades division. Dougherty will be the representative on the International level responsible for coordinating national bargaining, addressing any Industry wide issues or safety measures, offering local unions support and overseeing organizing efforts in the Motion Picture and Theatrical Trades Division throughout North America.

The newly elected International Brotherhood of Teamsters General Executive Board under General President-elect Sean O’Brien will take office on Tuesday, March 22nd, 2022 and will serve a 5-year term.

Founded in 1903, the International Brotherhood of Teamsters represents 1.3 million hardworking men and women throughout the United States, Canada and Puerto Rico.