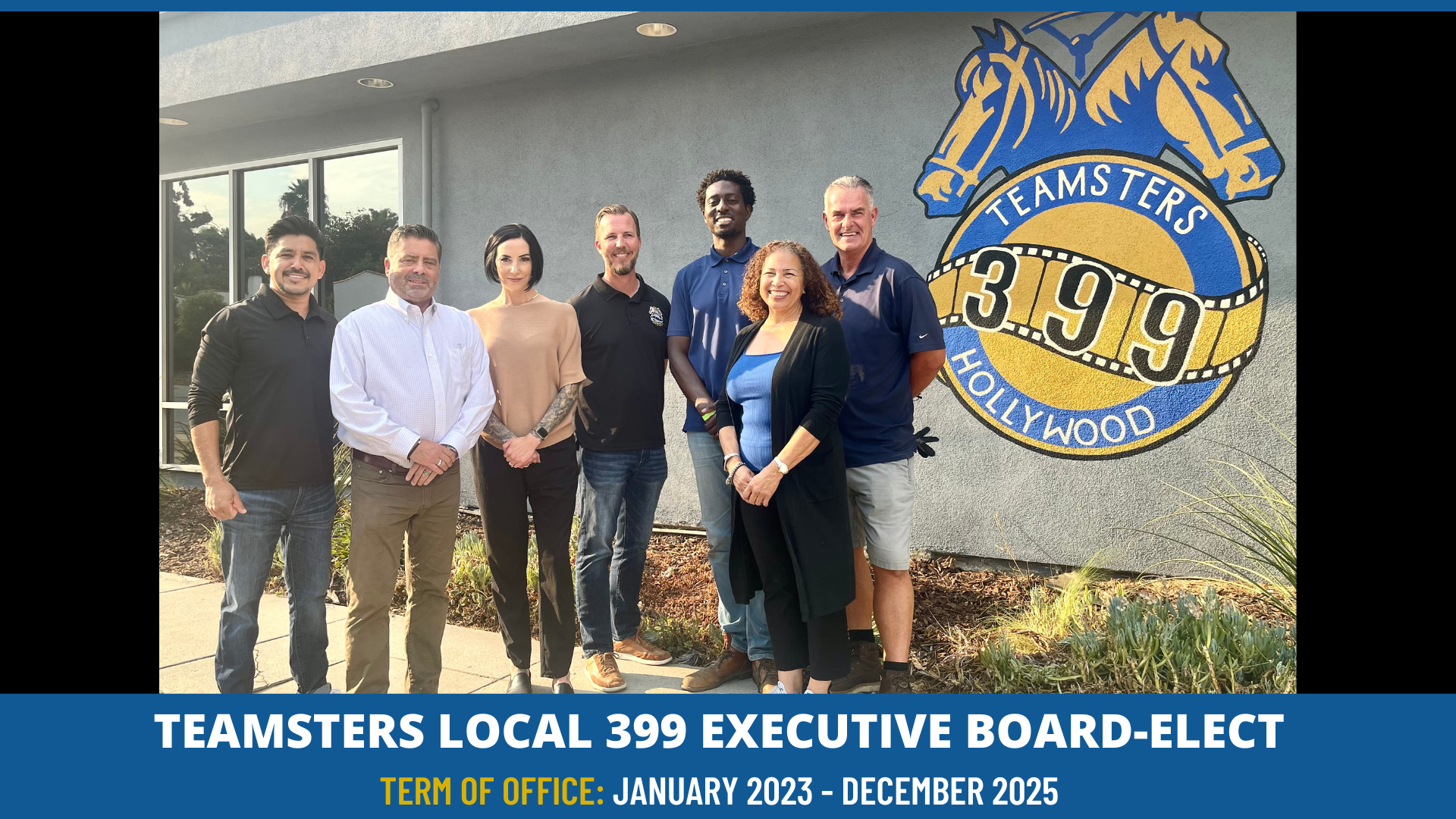 Local 399 Secretary-Treasurer Lindsay Dougherty and her entire slate has been elected to serve the 2023-2025 term of office as the Executive Board representing the members of Local 399 in an uncontested election.

LOS ANGELES – Last night, a Local 399 Nomination Meeting was held for the Local Union Officer Election for the 2023 – 2025 term of office. Per the International Brotherhood of Teamsters Constitution and Local 399 Bylaws, an election for the Local Union General Executive Board is held every 3-years for the positions of: Secretary-Treasurer, President, Vice President, Recording Secretary and (3) Trustee positions.

Teamsters Joint Council 42 Representative Chris Mihalow ran the nomination meeting that began promptly at 5pm at the Local 399 Union Hall. Seeing no contest, current Secretary-Treasurer Lindsay Dougherty and her entire team were named to the 399 Executive Board to take official office on January 1st, 2023:

“The role of a Local Union Executive Board Member is to ensure the foundation of our Local is well preserved, while protecting our retired, current and future members in all decisions made,” said Local 399 Secretary-Treasurer Lindsay Dougherty. “I am proud of the team we have put together to secure the solvency and operations of our great Local Union for the years ahead.”

Notably stepping down from his Executive Board Vice President role is Local 399 Business Agent and Political Director Ed Duffy. Ed has served the members on the Local 399 Executive Board for the past 18 years. In a letter to the 399 membership, it was noted that Ed will continue to serve the members at the Local as a Business Agent and in Sacramento and D.C., however this decision was made to help foster the growth of new leaders at Local 399.

“I have been extremely grateful and fortunate to have served as an Executive Board member for such a significant amount of time,” said Ed Duffy. “The intricacies of running a Local Union and the importance of a strong Executive Board is essential to ensure the success and support of our members and their families. My stepping down off the board is to help pave the way for new leaders to take the reins and continue to build upon the foundation that has been set by those before.”

Also stepping down were Gary Zuckerbrod and Armando Santana who have served the members well as current Trustees on the General Executive Board. They have dedicated their time and energy to protecting our 399 membership in this unique capacity for many years, and we are forever grateful for their sacrifice for the betterment of our Local.

Lindsay Dougherty, who is also currently serving as Teamsters Motion Picture and Theatrical Trade Division Director and Western Region Vice President, was elected by the Local 399 Executive Board in May of this year to replace outgoing Principal Officer Steve Dayan who retired at the end of April to finish out the 2020 – 2022 term of office. Her uncontested election for the 2023 – 2025 term of office makes this the first unchallenged election at Teamsters Local 399 since 2007.

“This is an exciting time in the history of our Local Union,” said Dougherty. “Our members continue to build their solidarity and power locally, throughout our Industry and International organization. As Secretary-Treasurer, my challenge and goal is to harness this power as we prepare for our next round of bargaining for our major agreements in 2 short years. Protecting, preserving, and improving the lives of our members and their families is a daily commitment, and I am grateful to serve in this capacity for the next 3-year term.”

Teamsters Local 399 currently represents over 6,000 members across Los Angeles working in the Motion Picture Industry as drivers, wranglers, location professionals, casting professionals, chef assistants and more. Local 399 has also recently welcomed 300 new members from New Mexico who service the film and television industry in the land of enhancement after a recent decision from the Teamsters General Executive Board expanded the Local 399 charter.