The DGA, SAG-AFTRA, IATSE, Teamsters and the Basic Crafts Announce COVID-19 Testing and Protocols Adopted with the AMPTP to Allow Production to Resume Safely 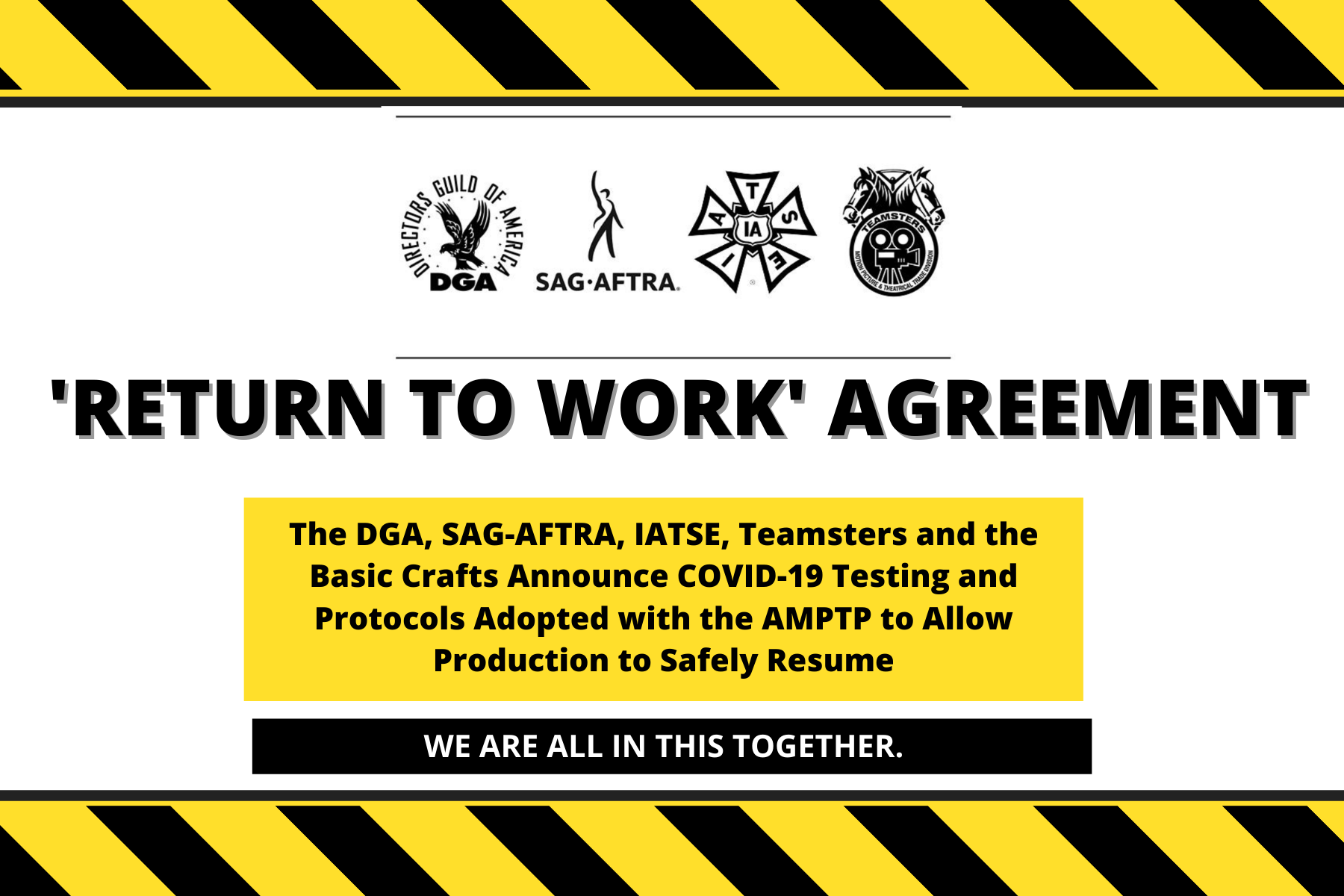 The DGA, SAG-AFTRA, IATSE, Teamsters and the Basic Crafts Announce COVID-19 Testing and Protocols Adopted with the AMPTP to Allow Production to Resume Safely

Los Angeles —The unions representing casts and crews today announced they have reached an agreement with the major studios on protocols to allow the industry to safely re-open. The protocols pave the way for creative workers, who have been hard hit by the pandemic, to resume their crafts and livelihoods in workplaces redesigned around their health. Guiding principles include strictly enforced testing regimens and safety protocols, a zone-based system, and diligent use of personal protective equipment (PPE). The new measures will be implemented by employers in order to minimize the risk of transmission. To ensure workers’ livelihoods are not burdened with added uncertainty during the pandemic, the agreement also includes COVID-19 sick leave and quarantine pay.

The agreement is the outcome of unprecedented coordination and solidarity between the Directors Guild of America (DGA), International Alliance of Theatrical Stage Employees (IATSE), International Brotherhood of Teamsters (IBT) and the Basic Crafts, and Screen Actors Guild-American Federation of Television and Radio Artists (SAG-AFTRA). This group worked with the Alliance of Motion Picture and Television Producers (AMPTP) for months to develop science-based protocols to minimize the risk of transmission, designed with the unique work environments of film and television production in mind.

The new guidelines are based on “The Safe Way Forward” report released by the unions in June, and developed in consultation with leading epidemiologists and experts; as well as the preceding industry white paper[1] delivered to state governments and agencies to examine the resumption of production.

Thomas Schlamme, President, Directors Guild of America said, “Getting everyone safely back to sets and back to telling stories in these difficult times has been critical for all of us. To overcome the challenges posed by our unique work, we collaborated with our friends at SAG-AFTRA, IATSE and the Teamsters, together with the Producers, to develop a comprehensive set of standards that will allow production to resume while minimizing the risk we, our families and our communities face during this pandemic. It has been a long and complicated journey, and none of it would have been possible without the collaboration and solidarity of our sister guilds and unions. At the DGA, we are forever indebted to the tireless efforts, perseverance and expertise of Steven Soderbergh, Paris Barclay and our entire COVID-19 Return to Work Committee, together with our National Executive Director Russell Hollander. We look forward to getting back to work and once again focusing our talents on telling stories for the world.”

Gabrielle Carteris, President, Screen Actors Guild-American Federation of Television and Radio Artists said, “SAG-AFTRA members, along with their peers in other entertainment unions, are anxious to get back to work, but safety has to be the highest priority. This agreement establishes sensible, science-based protocols that allow members to return to doing the work they love while managing risk. I am grateful to our sister unions, who pulled together during this extended crisis, as well as to the studios for collaborating on this important issue.”

Thomas J. O’Donnell, Director, Teamsters Motion Picture & Theatrical Trade Division said, “At long last, I’m confident that these protocols, as rigid and thoughtful as those of any industry in America, will keep crew and cast safe as well as the communities they live and work in. I thank our fellow Film Unions for all their hard work and unprecedented solidarity. I also commend the Major Producers for doing the right thing by their employees in extraordinarily challenging times.”

Secretary-Treasurer, Teamsters Local 399 said, “These joint discussions with our sister guilds and unions to develop Return to Work Protocols with the AMPTP have been truly historic. Together we have carefully reviewed the roles of every crew member involved in production and have fought hard to protect each craft and classification as if they were our own members. We not only shared a common goal of health and safety on the job, but also the preservation of all jobs throughout our Industry in this new COVID-19 world. On behalf of the Basic Crafts and all Teamster Locals in the 13 Western States, we are grateful for this collaborative effort and for the solidarity exhibited throughout the entirety of this process. After 6 months of addressing the devastating impact of COVID-19 on our members, we are ready to support them in their safe return to work and we will continue to advocate for their health and safety every step of the way.”

In the more than 80 years since its founding in 1936, the DGA has fought for the economic and creative rights of its members; protected their ability to financially benefit from the reuse of their work; established strong pension and health plans; and established jurisdiction in new technologies and distribution platforms. Today we represent more than 18,000 directors and members of the directorial team working in film, television, commercials, new media and other audiovisual media.

SAG AFTRA members are the faces and voices that entertain and inform America and the world. A proud affiliate of the AFL-CIO, SAG-AFTRA has national offices in Los Angeles and New York and local offices nationwide representing members working together to secure the strongest protections for entertainment and media artists into the 21st century and beyond. Visit SAG-AFTRA online at sagaftra.org

The International Alliance of Theatrical Stage Employees or IATSE (full name: International Alliance of Theatrical Stage Employees, Moving Picture Technicians, Artists and Allied Crafts of the United States, Its Territories and Canada), is a labor union representing over 150,000 technicians, artisans and craftspersons in the entertainment industry, including live theatre, motion picture and television production, broadcast, and trade shows in the United States and Canada.

The Motion Picture Division of the International Brotherhood of Teamsters represents nearly 20,000 Teamsters in North America who work on feature, television, commercial, and theatrical productions produced across the United States, Canada and around the globe.

[1] The white paper was developed by the Industry-Wide Labor-Management Safety Committee Task Force consisting of the unions named here, together with the AMPTP.