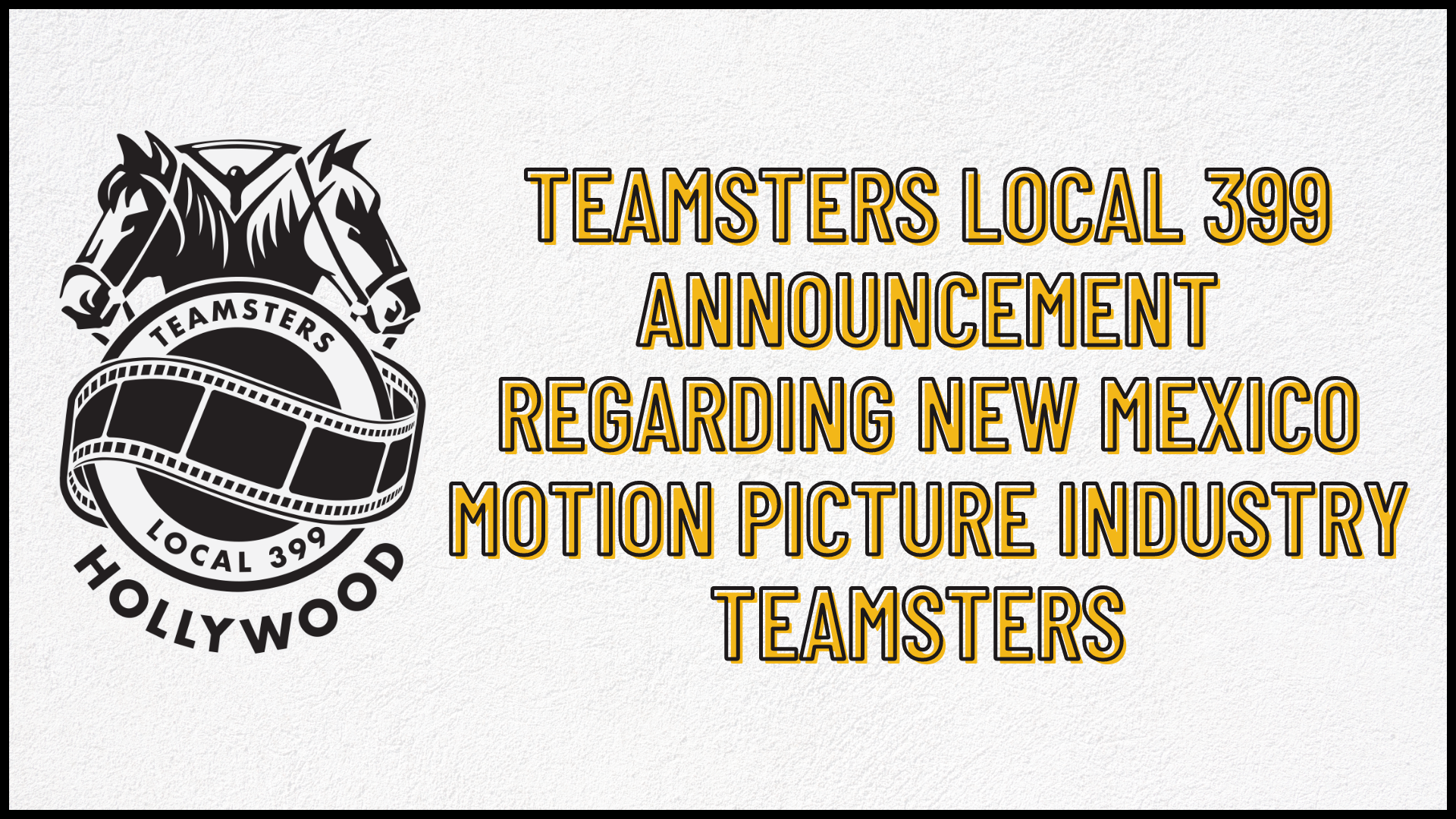 On Thursday, August 18th, Teamsters Local 399 was made aware of a resolution passed by the International Brotherhood of Teamsters General Executive Board (GEB) granting the addition of the Motion Picture Industry jurisdiction in New Mexico to the Teamsters Local 399 charter.

This conclusion came after a recent investigation took place in response to significant member concerns around the referral rules and financial structure for Motion Picture Teamsters in New Mexico. This investigation was to review the current processes of Teamsters Local 492 and make a recommendation to the GEB around the best course of action.

It was ultimately recommended that due to the findings from the audit, Local 492 should no longer hold the jurisdiction to represent Teamsters in the Motion Picture Industry. This recommendation was taken to a vote by the General Executive Board to not only remove the jurisdiction from Local 492, but, effective immediately, transfer those in the Motion Picture Industry in New Mexico to Local 399 as the new representatives of these members.

Teamsters Local 399 Secretary-Treasurer and IBT Western Region V.P. Lindsay Dougherty, recused herself from the vote due to the conflict of interest in the matter.

An email notification was sent to both respective memberships yesterday outlining the next steps and how Teamsters Local 399 plans to make a smooth, efficient, and transparent transition. Dougherty and Local 492 Principal Officer Trey White are both committed to work together to ensure the success of this process.

“We are committed to work together to make sure this process is done quickly, efficiently, and with the respect that each Teamster member deserves. That includes all 492 staff and representatives,” said Dougherty. “We believe this change of representation to be positive. Teamsters Local 399 is a craft Local which only represents Teamsters working in the Motion Picture Industry. We are well equipped to support all members in this Industry. We are dedicated to representing each member equally with the utmost dignity and respect.”

It was made clear in the notices to both 399 and 492 members that this change would not impact the Local 399 Industry Experience Roster, which is managed by Contract Services and localized to Los Angeles. Instead, the focus would be to create a fairer and more equitable path towards membership for New Mexico Teamsters; who will have their own separate roster of skilled and qualified workforce to support the work in New Mexico.

“Our hard working 399 members, and the ways in which we have built a strong and vibrant Local Union has attracted the attention of our International Leadership, as well as many other Local Unions across this Country,” Dougherty continued. “I expect this process to go smoothly, and I have full confidence in our Local 399 team and family to welcome our New Mexico Brothers and Sisters as we build our solidarity to take on the fights ahead.”

Two meetings have been set-up for this Saturday, August 27th to address both New Mexico Teamsters and Hollywood Teamsters around the most recent updates.

Stay tuned for more updates throughout the week.

JUST ANNOUNCED: 399 GENERAL EXECUTIVE BOARD FOR THE 2023 – 2025 TERM OF OFFICE  Local 399 Secretary-Treasurer Lindsay Dougherty and her entire slate has been elected to serve the 2023-2025 … Continued